Twenty-nine migrants have been detained, and the driver of the Ford Transit van in which they were traveling has escaped. Several police patrols chased the suspicious vehicle from the D1 motorway through the metropolis center, and the chase ended in Holešovice, where the car went off the road. Several dozen people ran out of the vehicle, according to police.

Police have detained 29 migrants from Syria after a fierce pursuit that involved not only several patrols but also a helicopter from the air, police spokesperson Richard Hrdina confirmed

“The driver escaped from the vehicle, and we are searching for him,” he added.

The chase began on the 4th kilometer of the D1 motorway in the direction of Prague, where the van failed to stop when police called.

In Argentinská Street, the car broke through the barrier at the parking lot and drove onto the grass, where fallen branches slowed it down. This was followed by people fleeing from the van into the surrounding area. 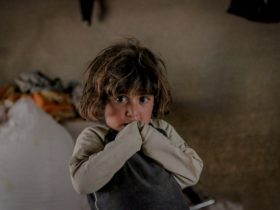