As technology advances, new devices and applications are being developed to aid in the better diagnosis of diseases and the saving of patients’ lives. The artificial intelligence Carebot is one of them, and it is now being tested. It can identify ailments based on lung X-rays in seconds, making doctors’ tasks easier.

Karolina and Daniel Kvak have created a one-of-a-kind AI program called Carebot that will drastically reduce the time it takes to diagnose a patient. It may diagnose a patient’s sickness from an X-ray of their lungs in a matter of seconds.

“Within a millisecond, the moment the doctor takes a picture of the patient’s lungs, he will determine whether he has pneumonia, or any other finding, or covid-19, for example, which will significantly speed up but and improve the quality of the entire treatment,” said Matěj Misař, spokesman for the Carebot system.

“The Carebot application works on the basis of deep neural networks. Neural networks are a mathematical model that tries to imitate to some extent the function of the brain, it works on the basis of training. We show that neural network some data set, which is X-ray images of the lungs. Based on these images, the system tries to learn to make a prediction correctly,” described the principle of the system developer Daniel Kvak.

One of the many benefits mentioned by the developers is the machine’s ability to operate 24/7, which means the learning process is more efficient, resulting in better outcomes in recognizing the sickness. According to the inventors, the technology has a 99 percent success rate on training datasets so far.

Mr. and Mrs. Kvak, students at Masaryk University in Brno, plan to finish the project with the support of their peers. They are also seeking assistance from public and private institutions that can supply them with the necessary resources.

The Carebot creators have  contacted the leading experts in the fields of radiography and pneumology, who have responded positively about the technology. The Kvak family’s program, according to Stanislav Kašík, head emeritus of the radiology department of the Kolin Regional Hospital, would make doctors’ work much easier in many ways.

While Carebot is capable of detecting a wide range of illnesses, it still has a long way to go before it can be used in healthcare. “At the moment, we still have quite a long way to go, as we need to get to the experimental testing phase. This means that we will be testing the app on real images of real Czech patients and then the path to certification and, of course, to hospitals opens up. If we are very optimistic…”, says spokesman Matěj Misař. 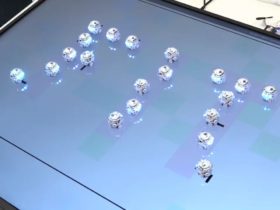