On the occasion of this year’s elections, the artist Lucie Gelemová organised an exhibition featuring portraits of top politicians. According to Gelemová, the response on social media has been contradictory, even in light of the upcoming elections. Politics is now a topic that resonates strongly in society. “People are hiding behind their profiles to release their negative emotions. It’s a shame, because politicians are people too and someone has to work in this profession,” the artist explained.

The exhibition is free for the public from September 24 to October 20 at the Municipal House in the Czech Manor Club in Prague. According to Gelemová, this is a symbolic place for her exhibition, as there are five plaques of men hanging in the Czech Men’s Club on October 28 and because in 1918, Alois Rašín signed the constitutional law on the establishment of an independent Czechoslovak Republic there. Some politicians  came to the opening and had a chance to  see their own portraits. One of them was Karel Havlicek, the Minister of Industry and Trade and Transport. Gelemová commented that she was very honoured by his presence and that he liked her portrait.

Gelemová revealed that she had to overcome her fear of people’s reactions to her art in order to turn her idea into reality. She added that her motivation was also to please her friend Václav Budínský, who came up with the idea. Gelemová admitted that she had the most work with the portrait of Finance Minister Alena Schillerová. She herself considers it the most beautiful portrait. “On the other hand, Mikuláš Ferjenčík was a very good portrait to paint. I had a clear vision that he should be a hippie and Jesus at the same time. “

Gelemová also revealed that she is surprised by the final form of her paintings. She never knows in advance what will be created during the painting. “I am not allowed to think. Someone or something guides my hand, “explains the artist. 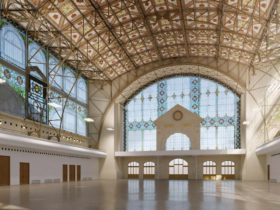