In the Czech Republic, 5167 people were treated for eating disorders in clinics last year. It is an increase of about 15 percent in ten years. The most significant increase was among adolescents aged 15 to 17. Last year, 1,093 were treated, 89 percent more than a decade ago. The number of children under 14 with eating disorders also increased by more than half. Women and girls made up the majority of patients last year, 87 percent. This is according to data provided by the Institute of Health Information and Statistics (IHIS).

“The statistics show a significant gradual increase throughout the last decade. In the period of the covid epidemic in clinical practice, we saw a considerable increase in requests for treatment, ” Hana Papežová, the head of the Centre for the Treatment of Eating Disorders at the Psychiatric Clinic of the 1st Medical Faculty of Charles University and General University Hospital in Prague, stated.

Since 2015, the number of new cases has been rising from 2,140 to 2,450. Last year, there were 2,323 new patients, about 40 fewer than year-on-year. But some pediatricians talk about seeing children with eating disorders in their offices more often during the current covid epidemic. The capacity of specialized facilities for these patients was reduced during the covid outbreak, according to Papežová.

As a result of social isolation, young people spent a lot of time on social media during the epidemic. But some networks are dangerous and often openly pro-anorexia, according to Papežová. Apps that track physical activity can also be risky. Teenagers can set unhealthy low-calorie goals or high athletic performance goals, according to the doctor.

“Social isolation during the epidemic contributed significantly to the use of these risky new technologies,” Papežová said. The epidemic was also tricky for existing patients, according to Papežová, as they became more aware of the attention paid to their outward appearance during online sessions.

Of the 2,323 new cases last year, 1,007 were due to anorexia, often associated with an unhealthy obsession with healthy eating, known as orthorexia. Last year, 2,327 people were treated for anorexia, a number that has risen by more than a third in a decade. Orthorexia is now on the rise, according to Papežová, although hidden psychogenic overeating and other atypical forms of eating disorders are most common in the general population. 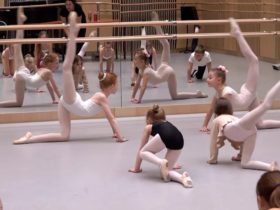