More significant warming will probably not arrive until the beginning of May. This follows from the long-term outlook published by the Czech Hydrometeorological Institute (ČHMÚ). However, it will warm up partially during this week, which will be marked by rain, but at the end of the week, temperatures will reach the 20-degree mark.

“Based on the forecast of weekly average temperatures, the first two forecast weeks (until the end of April) are likely to be the coldest, after which temperatures are expected to rise more, so the last week (from May 9) may be slightly above average in temperature,” meteorologists said.

This week’s weekly average maximum temperatures should be in the range of 10 to 15 degrees Celsius, with nighttime averages in the field of 0 to 5. Each week after that, it should be slightly warmer.

Meteorologists expect an average to slightly above average rainfall in the coming weeks. “The second forecast week (from April 25) is likely to contribute the most to the total for the forecast period, with the other three weeks not expected to deviate significantly from long-term averages,” they wrote.

This week’s maximum daytime temperatures will range from 5-10 degrees Celsius on Tuesday to 19 degrees at the weekend.

On Wednesday and Thursday, there may be frost at night and early in the morning, with meteorologists issuing a frost warning late last week for possible damage to vegetation, particularly flowering trees. It can be expected again. 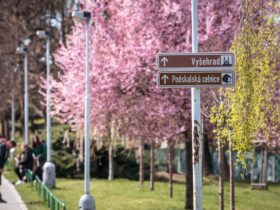 Spring is back. At least for a few days