Petr Fiala, Czech Prime Minister and re-elected chair of the Civic Democrats wants to find a strong candidate for the presidential elections who can compete with populists and radicals. He is not planning to leave the role of the prime minister himself.

He dismissed speculation that he would run for the post himself, saying he had received a lot of confidence in last year’s parliamentary elections. He wants to devote himself to the job of prime minister.

Fiala said both the ODS and the Together coalition are debating the candidate. “I do not insist that it be a candidate from the ODS,” he said.

He stressed that what is important is a strong personality who will have a real chance to win and defeat the populists and radicals who will also run for the post of head of state.

At the weekend ODS congress, Fiala said that selecting a candidate would take several months. He said the Civic Democrats are ready to support the party’s nominee and a strong non-partisan figure. He also stressed that it would be important in the selection process that the Civic Democrats be proud of the president and that the citizens can rely on him.

Soon after the New Year, the Czechs will probably choose a successor to Miloš Zeman, whose second term will end early next year.

Vystrčil visited Kiev with his collegues 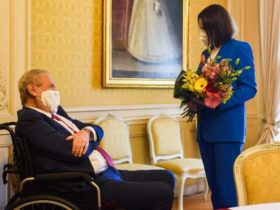 Zeman asked Fiala to move the office for the Belarusian opposition