The European Parliament (EP) is demanding that by 2026 there should be at least one charging station for electric vehicles every 60 kilometers on all major roads in the EU. In the Czech Republic, that plan seems to have hit a snag.

Under the MEPs’ proposal, each station would have to have an output of at least 300 kilowatts and include at least one charger with an individual work of 150 kilowatts.

Currently, the most common chargers at Czech stations are 50 kilowatts.

The proposed rule approved by the EP at the end of October is part of the “Fit for 55” climate package, which aims to achieve a 55% reduction in greenhouse gas emissions. The regulation now heads to the EU Council.

Construction does not pay

While the Czech Republic, for example, ranks a flattering eighth among EU states in terms of the ratio of electric vehicles per charging station, the Transport Ministry and major potential charging station operators still find the European Parliament’s requirement challenging to meet. This is even though around five billion crowns of subsidies are to be allocated from operational programs between 2021 and 2026 to support the construction of chargers alone.

“Like most other member states, we consider the EP proposal to be completely unrealistic,” Transport Ministry spokesman František Jemelka said. From the point of view of the ministry, the original proposal of the European Commission was already very complicated, mainly because it is impossible to ensure the construction of such high-capacity charging stations in the given timeframe, especially in terms of the sufficient capacity of the energy network.

“Given that the majority of Member States have a similar position to the Czech Republic, we do not expect the EP to succeed in pushing through this requirement during the negotiations with the Council, which began during our Presidency and will continue under the next Swedish Presidency,” Jemelka added.

Current public charging station operators also believe that achieving the EP’s target would be difficult. “Meeting this target will certainly not be easy. It is true that a specific germ of charging infrastructure that can be built upon already exists.

Still, in this case, we are talking about capacities of hundreds of kilowatts to units of megawatts of charging power in one locality, which already represents a complex and incredibly time-consuming solution,” Martin Schreier from CEZ Group, which operates about 470 public charging stations across the Czech Republic, said.

The problem lies primarily in securing the necessary electrical power. “The construction of the stations itself is not yet commercially viable and is only possible with the help of investment subsidies, such as CEF programs or funds distributed from the Operational Program Transport,” said Schreier.

“Currently, the construction of stations is not profitable and will not be in the next few years either. The reason is the low number of electric vehicles on our market,” confirms Martin Klíma, Managing Director of E.ON Drive Infrastructure.

“Under the current building permits and land acquisition conditions, this goal is challenging. In our opinion, it is necessary to revise the set rules,” says Karel Hanzelka, spokesman for PRE, referring to another obstacle.

According to the Ministry of Transport, there are currently more than 13,000 electric vehicles in the Czech Republic, using more than 2,600 chargers. The National Clean Mobility Action Plan predicts that between 19,000 and 35,000 charging points should be built by 2030. 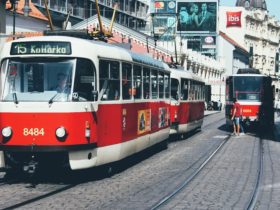