President Miloš Zeman vetoed an amendment to this year’s budget on Thursday. He is concerned that revenues are lower than they could have been if the amendment to the income tax law had been adopted earlier. House Speaker Markéta Pekarová Adamová expects the veto to be overridden.

Zeman gave his reasons in a letter addressed to Pekarová Adamová (TOP 09).

“The reason for my veto is that the revenue side of the budget is lower than it could be if the submitted amendment to the 2022 state budget law were preceded by an amendment to the income tax law,” the president said.

According to him, the budget is based on a reduced tax rate on personal income, resulting in a budget shortfall of CZK 90 billion, about a quarter of the budget deficit.

“At the same time, when the super gross wage was abolished, it was assumed that the said tax rate would be returned to its original level,” the president said in his justification, pointing out that the sponsor had committed to this in the rationale for the proposal.

The abolition of the super gross wage was pushed by the ANO movement together with ODS and SPD.

The return of the personal income tax to its 2020 level, when the abolition of the super gross wage took place, is also one of the critical proposals recommended to the government by experts from the National Economic Council of the Government (NERV). They point to the unsustainability of the state’s economy with ever-increasing expenditures.

The government has so far resisted increasing the composite tax quota.

In response, Pekarova Adamová said she would override the coalition’s veto. “She said the president’s move is primarily “an expression of his dissatisfaction with the cuts in the budget of the Lány Forestry Administration.”

Its director, Miloš Balák, was convicted of manipulating public contracts and pardoned by the president. He recently decided to leave at the end of the year. 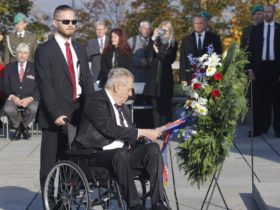