Firefighters in the Zlín region destroyed a fire caused by charging a mobile phone. One of the apartments was hit by flames when a mother and her children were out for a walk. Due to a technical fault, the device, placed on the sofa, started to burn. Investigators estimated the damage at CZK 700,000.

The fire broke out on Thursday afternoon in the village of Březůvky. Five firefighting units intervened at the scene.

“At the time of the fire, there were no people in the apartment. As it was later found out, the owner went for a walk with her children and left her mobile phone charging at home, placed on the sofa. After returning from the walk, the sofa was already on fire, and the apartment was heavily smoked,” fire department spokesman Roman Žemlička described the situation.

The evacuation of the three-story building was not necessary. The rescuers gave the owner of the apartment psychosocial assistance. No one was injured during the intervention.

Metro had a breakdown on line A 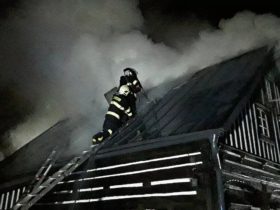